Why do YOU contest? 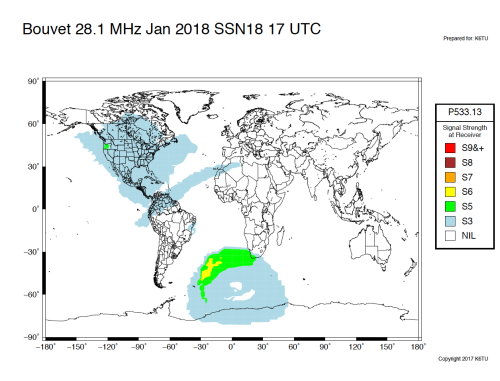 For me, part of the fun of Ham Radio is working to improve my understanding of propagation.  That led me to create K6TU.NET and in turn the opportunity to work behind the scenes helping DXpeditions with propagation & antenna modeling. Since I started this in 2012, I've helped over 50+ Dxpeditions, most recently the planning for the upcoming 3Y0Z expedition to Bouvet.

"It's tough to make predictions, especially about the future!"

Part of the "tough" when it comes to modeling propagation is the uncertainty of where solar activity will be come January 2018 and cycle 24's continued decline. At the time I ran the modeling, NOAA predicts a SSN value of 18 for January of next year. A couple of points up (or more likely down) won't make a huge difference in the model results. The Sun could still throw a wrench in the works with a CME (coronal mass ejection) or flare which could cause storm conditions in the Earth's geo-magnetic field and kill propagation for a couple of days.

Ralph K0IR, one of the team heading to Bouvet and who is intimately involved in the planning/preparation for this epic DXpedition, recently posted a tweet on Twitter with a link to the 10m propagation video I had produced as part of modeling work.

10 Meter Propagation to North America -- Could it happen between 1200 and 2000 UTC. Video based on NOAA estimated sunspot number Jan. 2018 pic.twitter.com/xWuZSMtjqo

Work Bouvet? On 10m? K6TU must have lost his marbles!

Not so fast...  when was the last time you called CQ on 10m? Didn't bother because the band is "dead"? Likely the band is dead because everything thinks the same way! I had a similar view during the VP8STI expedition to South Sandwich Island. On 15m, the propagation modeling showed a similar weak opening but I was very skeptical. Nevertheless, as I worked in my home office, I kept watch on the published 15m phone frequency - albeit, with very low expectations. Yet, as the model predicted, a signal (an oh so weak signal) fluttered in and out of the noise - cranking in 20 dB of pre-amp for once made a difference between copy and no copy. Sure, enough, there they were and shortly after a number of stations here in the San Francisco Bay Area were in the log.

At a minimum, it pays to monitor solar activity and consider the impact on the propagation models.

One way of monitoring the impacts of both solar activity and the Earth's geo-magnetic field is to keep an eye on the Equivalent Smooth Sunspot Number, a solar index produced by NorthWest Research Associates. 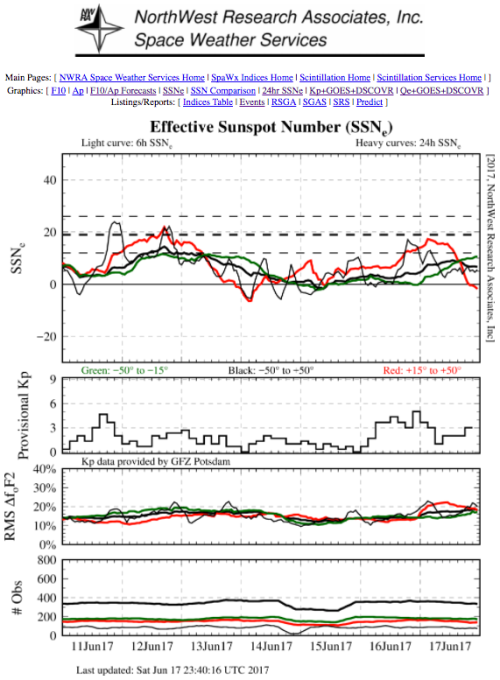 The SSNe (e for equivalent) is a back solved value; it compares the reported MUF values from ionosonde stations around the world, with the input value to the propagation model which would have generated the observed values. Put another way, the SSNe value, when plugged into the prediction model, generates MUF values that closely match those observed. The chart above shows how this value fluctuates over time and the root mean square (RMS) error between the observed and predicted MUF values.

With fortunate timing, this image capture shows the impact of two solar events that disturbed the Earth's geo-magnetic field. You can see that both events generated a period of low propagation (SSNe value zero or negative!) but in BOTH cases, were preceded by a brief period of significant enhancement.

Capture one of these events and the predictions could easily be on the money!

Two things to note about the predictions; first, the map overlay shows predicted signal strength in S units - the pale blue color indicates a value greater or equal to S3 but less than S5. With typically low average noise levels on 10m, this is workable with a good set of ears and some help from a pre-amp. The second point is the predictions are generated from the ITU-R Recommendation P.533 annex 13 - the latest revision of this model from late 2016 - a much improved model over that of the late 1980's VOACAP model. Still, like VOACAP before it, Rec. 533.13 uses a statistical model of the ionosphere as it basis. Remember the quote "Lies, Damned Lies and statistics!"

Only time will show whether 10m will cooperate and some lucky few will work 3Y0Z on 10m come January 2018.

But for sure, if you don't listen, you won't be one of them!