SmartSDR & FlexRadio 6X00 - Retraining the operator
Why "Unlimited" is boring...

One of the things on my Ham Radio bucket list was to get on 10 GHz.  Microwave operation is very different from HF or even VHF - and at least on 10 GHz, a lot more interesting than just "line of sight".

In the course of the last few months, I built myself a rover station for 10 GHz.  "Rover" means that I can fit the entire station into the back of my SUV and drive around (roving) different sites making contacts in the the microwave contests.  I'll document the process I went through in some future blog posts - it was much easier than I expected and doesn't require a room full of test equipment.  Here's a picture of me and the station after making my first 10 GHz contact. 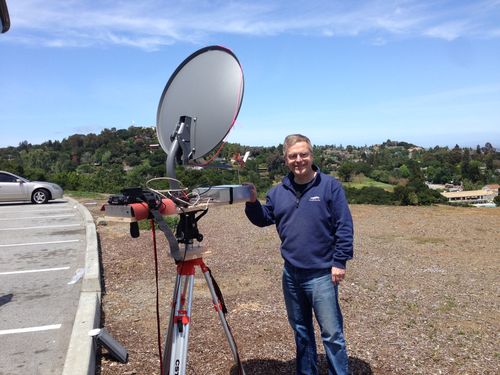 Operating on 10 GHz requires the ability to point the antenna with reasonable accuracy as the antenna beamwidth is quite narrow.  My 2 foot dish as an example has ~ 34 dBi of gain and a 3 dB beamwidth of 3 degrees - put another way,  1.5 degrees either side of peak!

All antenna headings are measured as TRUE bearings, not MAGNETIC - particularly if you calculate the bearing from a pair of Maidenhead locators (yours and the other guy's).  Like everything else, there is an "App" for that - plug in the other guy's grid, your's is calculated from the GPS in the phone and up comes the bearing.  The compass in my iPhone is also accurate enough to get me within a degree or so of the correct heading but does require some fiddling around with calibration and matching the heading of the antenna to the phone.

If you watch closely, you will see a small box at the end of a tube sitting above the dish - curious minds were rewarded with an explanation - its a combined magnetometer and accelerometer to provide heading and a digital level.

With this inspiration, I set out to build Rover Buddy (tm) - a small Arduino based system with an OLED display (great in strong sunlight) to provide sensor data for my rover station. 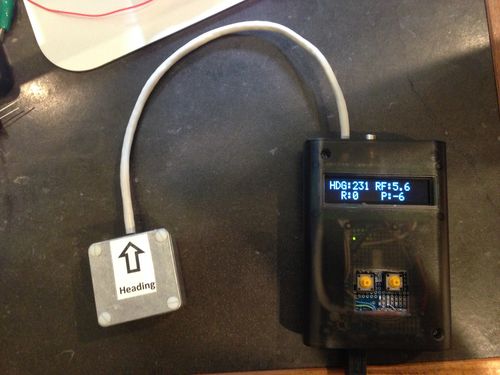 Arduino open source hardware and software made this project very easy.  With an Arduino Uno, OLED display and combined magnetometer/accelerometer sensor from AdaFruit the project was off to a flying start.  All the heavy lifting software wise was done by the libraries available either from Adafruit or from Arduino.cc.  The libraries provide the code (already debuuged of course) to drive the display and the sensor.

I added a couple of switches for menu selection/navigation plus a reference voltage for the analog/digital converter in the Arduino on a prototyping shield plugged into the Uno.  This also provides a convenient place to attach the wires for the sensor (twisted pair for the I2C bus) and the display.

The sensor is mounted on a small board in the Aluminum box - since Aluminum has the same permeability as air (1), the metal has no impact on the sensor readings.  Nylon screws secure the board and the lid of the box.

Rover Buddy gives me heading (adjusted for magnetic declination), pitch and roll so I can level the tripod holding the station and RF power output from the 10 watt amplifier feeding the dish.  The amplifier has a diode RF power sensor on its output - the voltage from the detector (roughly 0 to 2.5v) is fed to one of the ADC pins on the Arduino via a phono socket on the case.  A look up table converts and scales the voltage to a power reading on the display.

I'm not too thrilled with the case (also from Adafruit) so post the first weekend of the 10 GHz contest, I'll likely re-box everything but otherwise everything works great.

My final step is to secure the sensor to my rover station and then I'm done!