FlexRadio Systems truly hit a home run with the 6000 series radios and SmartSDR.  Over the last year I've made close to 10,000 QSOs in contesting, DXing and general operating, spend hundreds of hours listening to the bands and integrating the radio into my station.

Count me as a very satisifed Flex-6700 owner!

The last week has seen some excellent conditions on 6m - the band has been open from California to stations across the US and into Asia with Japan and Taiwan appearing on the DXclusters.

So yesterday when I got home from the office, still needing to respond to the email backlog from my vacaction, I fired up SmartSDR and started monitoring 6m from my QTH in Woodside, California.

With a single panadaptor displayed by SmartSDR, I was watching 6m from about 50.025 MHz up to around 50.175 MHz allowing me to monitor the beacon, CW and Phone sections of the band.  Returning to my email, I tuned the  slice from time to time with the FlexControl as I saw stations appear on the band.

I also had SpotCollector running (the spot analyzer incorporated in DXLab) and began to see a number of new spots show up on JT65, much higher up in the band at 50.276 Mhz.  JT65 seemed like a perfect way of monitoring activity while I plowed through email.  Easily done - retune the radio, fire up WSJT and keep a eye open on both spots and WSJT.

About 30 minutes later I saw a JA station spotted by a station in the far north of California.  Email was promptly disregarded as I reached for my headset.  I started to reach for the mouse to retune the radio when a thought struck me...

Instead, I used the mouse to pull up a new panadaptor, create a slice and click on the spot - only to find slice A instantly retuned away from the JT65 frequency.  Doh!  SpotCollector and DXLab aren't FlexRadio 6000 aware and so retuned "VFO A" just as I'd instructed.

I quickly retuned slice A to 50.276 MHz,  manually tuned slice B to the reported frequency of the JA spot and set the mode to CW.  I muted slice A  (still sending audio as data via DAX to WSJT) and turned my attention to slice B.  I couldn't hear the JA - I could hear stations working him from a couple of hundred miles away - spotlight propagation (not uncommon on 6m).

With the headset on and monitoring the JA's frequency, I returned to email.  My hope was that propagation might begin to drop further south and west as the solar terminator approached.

A few emails later, I saw some SSB signals on the panadaptor and wondered whether these signals might be from Asia.  I reached for the FlexControl to tune the slice away from the JA, only to realize again, I don't need to retune the "radio"!

A couple of mouse clicks brought up a third slice, selected SSB mode, made the newly created slice C active and adjust the audio pan controls so that I could listen to one slice on each ear. 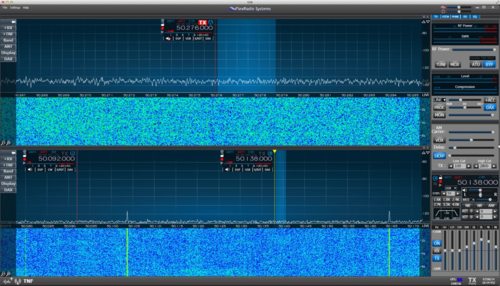 Now I was set!  I never heard the JA but I realized I was beginning to re-train myself to think about the Flex-6000 not as a "radio" but as the server it is!

I could never have begun to do all this with a conventional radio!

We have great hardware (the Flex-6000 series radios), great software (SmartSDR), but getting the best out of the radio requires upgrading and retraining the wetware - a.k.a. THE OPERATOR.

And this is just the beginning...