The K6TU Control iPad application is now available via the Apple™ App Store.  If you are already familiar with the app and what it does, you can click on the link below to view K6TU Control in the App Store.

The genesis of K6TU Control began at the International DX Convention in Visalia, CA back in April 2013.  As in 2011, I had been asked to manage the get-on-the-air station for the convention and so had asked the good folks at FlexRadio Systems whether they would provide a Flex-6700 as the core of the station.  Not only did they agree but they also sent Steve Hicks N5AC and Jim Reese WD5IYT to keep an eye on the radio (and me!).

I was able to spend a lot of time talking SDR and development with Steve and Jim as we watched folks use the N6V station.

As a serious contester, I was keenly interested in the workflow of operating the Flex-6700.  As I wrote in my last post on this blog, computer controlling ANY radio brings with it the necessity of thinking about workflow - how to integrate computer control of the radio with the other tasks you need to perform in a contest, DXpedition environment or other situation where speed and efficiency are paramount.

The idea behind the FlexControl had been to streamline contest workflow for the most frequent operation of the radio - tuning (either VFO or RIT).  What I really wanted was a way to control the other functions of the radio without needing a second keyboard and mouse.  As Jim, Steve and I talked the idea over, the idea of the iPad app was born.

Here's a screen shot of the main view of K6TU Control. 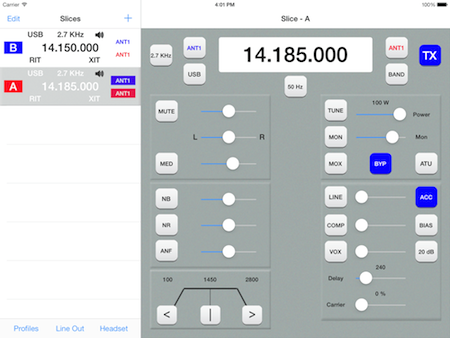 K6TU Control shows a list of open slices on the left and then shows the full detail of the selected slice on the right.  A tap on the + button at the top of the Slices list will create a new slice with exactly the same configuration (frequency, mode, antenna, filter size) as the slice selected and displayed on the right.

Click this link for a full description of the application.

Although pictures are worth a thousand words, videos are priceless - so with great thanks to Mack W4AX, this video shows you some of the features in use.

K6TU Control requires iOS 7 and runs on all iPad models since the iPad II - you must have your iPad connected via WiFi to your home network and Flex-6000 series radio.  This application is intended to optimize workflow in conjunction with SmartSDR and a FlexControl.  As a consequence, no screen real estate is used for a pan adaptor display and the app does not support streaming audio from the radio.

The app allows you to create and save the radio configuration as a profile together with custom filter configurations.  Access these features via the Profile button at the bottom of the Slices list.

Here's a view of my contest operating position together with the iPad and FlexControl. 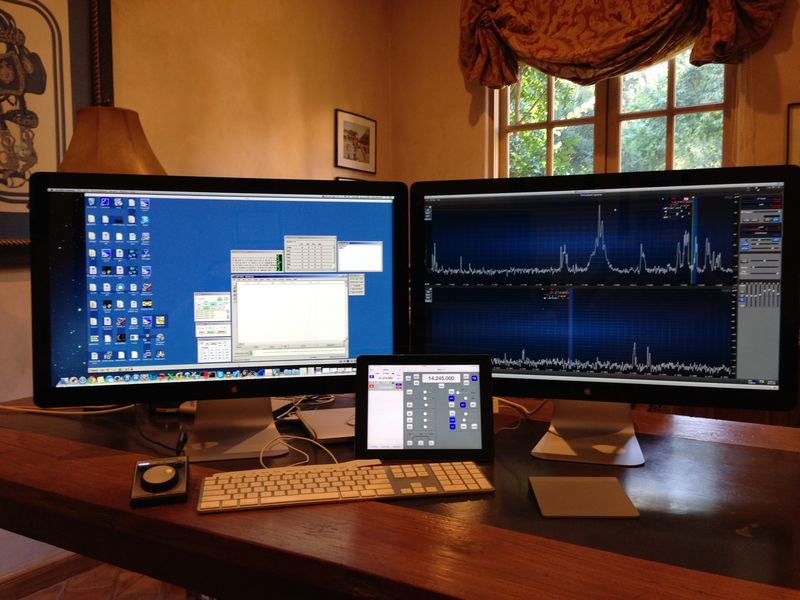 I couldn't have done the development of K6TU Control without the help of the folks at FlexRadio Systems and the folks on the alpha/beta test team who provided feedback on usability, operability on different iPad models as well as testing.  A sincere THANK YOU to all!