Origins & Refinement of the Contest Knob - II
K6TU.NET - Propagation as a Service

Building the Tuning Knob and getting it working was just the tip of the iceberg.  My sense from the beginning was that if I had a need for a contest control for my FlexRadio based station, others would too!  So it didn't take long before I started thinking about taking the tuning knob from a project to a product.

Building a product for use by multiple different people is a very different proposition than simply building a project.  A project just has to work and seldom is the cost a significant issue.  A product on the other hand has to meet a set of requirements from functionality all the way through to volume production.

Kevin K6TD and I had been through this many times before – both in our professional life developing products for companies we worked for as well as our own company.  Not only do you have to produce a product but you also have to sell it!

We decided to build the tuning knob with product production in mind, get it working, build enough units to prove out the user requirements and then look for someone who would be interested in producing and selling a product.  Fortunately we had a team of people in Steve K5FR, Kevin and I who knew how to do this and moreover, weren't daunted by the prospect of finding a partner.

It didn't take us long to get the first prototype version designed, built and working!  I guess it's deeply embedded in my genes but the thrill of building something and getting it working never gets old.  Assembling the rev A boards was no exception – we built up a handful and starting giving them to folks we thought would give us good feedback.

We sent one of the boards to Greg Jurrens, the Vice President of Sales & Marketing at FlexRadio Systems.  Greg is an avid VHF operator who also likes to operate contests.  Greg used the tuning knob and really liked it – he liked it so much that he called me and asked if we'd ever thought about turning the tuning knob into a product – BINGO! We had our potential partner!

Over the next few months Greg and the team at FlexRadio gave us great feedback on the knob and we began talking about what be necessary for FlexRadio to take on production and sales.  One thing led to another and eventually FlexRadio assigned Graham KE9H to work with us to turn the tuning knob into its final version.

So today I'm delighted to be able to announce that FlexRadio will be releasing their FlexControl product at the International DX Convention at Visalia, California next week!  FlexControl is the product version of the Tuning Knob designed and built by Kevin K6TD and myself with full software support in DDUTIL provided by Steve K5FR. 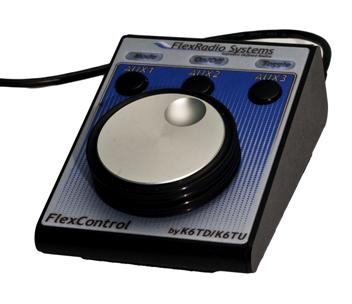 Gerald Youngblood CEO of FlexRadio Systems and Greg Jurrens have been kind enough to allow me to provide this preview of the product ahead of its appearance at Visalia.  Greg tells me it will retail for $129.95 and will be available for orders & shipment by the time of the Dayton Hamvention in late May this year.

It's been a great journey and we're delighted at the outcome!