Origins & Refinement of the Contest Knob – I

The K6TD & K6TU Contest Knob is finally approaching production (no, not giving out the date yet!). So I thought I'd give a little background on how the knob came to be and how it got refined from the original idea to the product version.

My conversion to a radio station without knobs and buttons began in the summer of 2003. I'd changed QTH and finally had enough space to start thinking of serious antennas. However, there was one wrinkle… I wanted to have the antennas located away from the house for aesthetic reasons. Not wanting to pull long lengths of coax, I elected to remote the radio to be close to the antennas. At the time, I chose the black box version of the Kenwood TS-2000 (the TS-B2000) that is completely controlled via a PC – no front panel beyond an on/off switch.

The station setup worked well but I missed the simple process of tuning across the bands – using a mouse wheel didn't cut it with the Kenwood software. So with the encouragement of Kevin K6TD, I set about implementing a PIC based tuning knob. This was my first PIC based project – fortunately both the hardware and PIC software were simple. I built the first generation knob around an optical shaft encoder – I think I paid about $100 just for the encoder itself – a precision unit that produces 1000 steps per revolution. Total overkill but it worked! 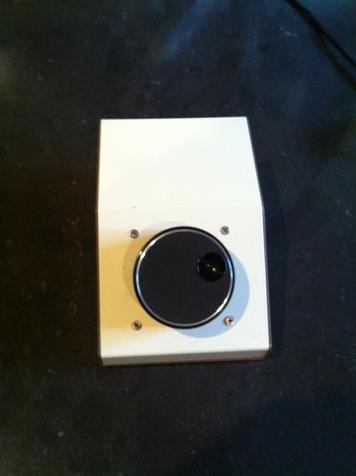 The size of the optical encoder drove the selection of the case – for scale, the knob is just over 2" in diameter and the four screws visible in the picture secure the encoder. The case is about 4" wide and 6" or so wide. Looking at it now makes me think of an early 1970's car – big, square and ugly functional.

The PC software wasn't so straightforward – I wrote a Windows program that took input from the knob on a serial port and then faked keystrokes to the Kenwood control program. It worked ok so long as you didn't get too carried away with spinning the knob – the resulting tuning lag was a mess!

I wasn't very active until in the early part of 2009 I decided to upgrade my radio. K6TD was the catalyst for this decision; Kevin had become a serious contester and bent my ear about how much fun he was having especially after a serious station upgrade. Waving a large carrot, Kevin invited me to operate the 2009 ARRL Phone Sweepstakes with him as a Multi/Single station. Years earlier I had been an avid contester and the thought of radio sport got me motivated to improve the station.

By summer of 2009, I'd made two decisions – I applied for a vanity call sign to replace N6TTO (a pain on CW and a mouthful of phonetics) and after much research, ordered a FlexRadio Flex-5000 as the core of a new station. You can read more about that process here on some of the early postings on this blog.

My first serious contest effort with the Flex-5000 was the 2009 California QSO Party – considering low power (100 watts) and limited antennas (an HF vertical and G5RV dipole), I had a blast with about 430 QSOs. It was my first contest using logging software (N1MM) and operating the radio via PowerSDR – so although there were several times I found myself all "fingers and thumbs", I put this down to the learning curve of contest operating.

A few weeks later I found myself at K6TD operating Phone Sweepstakes. Wow! What an experience! Kevin had built an awesome station at his QTH in Cupertino. His home sits on something of a bluff with the ground dropping off in most directions. With a 3 element Steppir at 55 feet, an Elecraft K3 and full legal limit from an Alpha 87a amplifier, we were a serious signal on the band.

Kevin was a very gracious host allowing me first up in the batting order – the initial rates were probably around 100 QSOs/hour and I was having a blast – I was struck by how Kevin had worked to streamline the workflow – the logging program (Writelog) remained in focus the whole time and apart from using the main VFO knob or RIT control on the K3, you didn't have to touch the radio.

As I switched off with Kevin for a break, I realized that I need at least ONE knob to operate my Flex-5000 in a contest and optimize the workflow between radio control and the logging software. The seeds for the next generation tuning knob were planted…