A broadband contest antenna for 80m

The challenge with contest operation on 80m is finding an antenna that works well over the range 3.50 MHz to 3.85 MHz.

As station enhancements have progressed, my 80m antenna has gone from a G5RV (a total compromise on 80m with tuner use being mandatory), to a homebrew 80/40 "shorty" dipole (good for about 80 KHz on 80).

After hauling the 80/40 dipole up and down for a year to tune it for specific contests, I started looking for a broader band antenna for 80m that wouldn't require a tuner and at the same time was simple to make.

Unusually, I didn't find the solution on the Internet but found a reference in ON4UN's Low Band Dxing handbook (just issued in the 5th revision and a "must have" for the low band operator) to the "80m Dx-Special" designed by Frank Witt AI1H.

The coverage of this antenna in the ON4UN book is sparse but did have a reference to a couple of articles in QST back to 1986 and 1989. Fortunately, as an ARRL life-member, I have access to the online archive of QST so I quickly dug out the articles.

The AI1H DX Special is an 80m half wave dipole that uses a coax resonator as part of the dipole legs. Here's a diagram with the correct lengths (the lengths in some editions of the ON4UN book are incorrect):

From the diagram, you can see three separate lengths of coax are used. The shortest length is used to establish an off center feed for the dipole as part of an impedance match and then crosses-over (coax center->shield, shield->center) at the connection to the longest length which acts as a capacitive section. The remaining length is a shorted stub which acts as an inductive section.

The remaining length of the dipole sections is made from 14ga copper wire. The antenna is fed as a T – in my case using a standard SO239 T connector via a sleeve balun (a length of coax cable that passes through a number of ferrite cores) to choke off common mode currents.

If you have access to the QST archives, you can find AI1H's excellent analysis of the underlying design of this antenna in:

The three sections of the coaxial resonator in this antenna act as a combination of an impedance matching transformer coupled with a resonant LC circuit which broadens the range of operation of the DX Special to an SWR match of better than 1.6:1 across the range of 3.50 – 3.85 MHz. Using the coax as the resonator provides an efficient way to broadband the antenna with minimal added loss – the broadband operation incurs a 1 dB penalty at the band edges, less elsewhere.

Here's the SWR plot captured from the version of the antenna I built and put up. 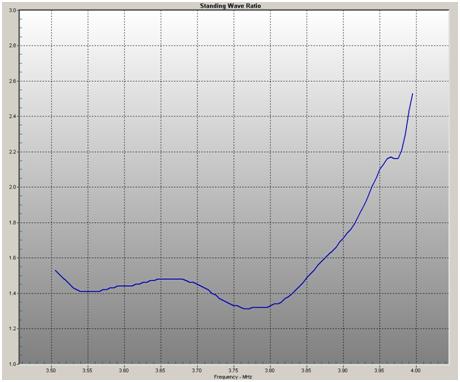 From the first contacts I have made on 80m using the antenna, it radiates at least as well as the 80/40 shorty it replaced and the amplifier operates happily all the way to about 3.9 MHz.

A couple of construction notes: