Thanks to Bruce W1BW and WSPRnet.org, the entire database of WSPR spots can be downloaded in CSV format by the month. You can access the download page on the WSPRnet web site.

I wrote a simple PERL script to parse the data and convert it into a format suitable for plotting in EXCEL.

The first analysis was to take the spot data and aggregate it by antenna across several days. My rationale was that the propagation varied over the course of the measurement period on each antenna but would be fairly consistent because of the solar minimum.

There are some errors introduced as a result of this assumption that I'll discuss at the end of this post.

I wanted to plot the maximum distance of an observed "spot" by time of day and reported received SNR for a given power level. To do this, I built up a dynamic 2-D array of time slots (00:00, 00:02… 23:58) and ranges of received SNR. I chose to split the SNR range from -32dB (the lowest reported by WSPR) and everything greater than 10 dB) into 15 "buckets".

The PERL script processes the CSV formatted data and build the array. As each spot is processed, it captures the maximum distance of the spot for that combination of time slot and SNR.

There are some anomalies in the data – despite the time synchronization required for WSPR operation, some spots are reported on odd minute periods or as part of the next period. Odd minute spots are considered to be part of the previous period – there's no way to tell if the spot was reported on the next period so this issue (small in number in the database) was punted.

The processed data was dumped as a CSV file and imported into EXCEL. 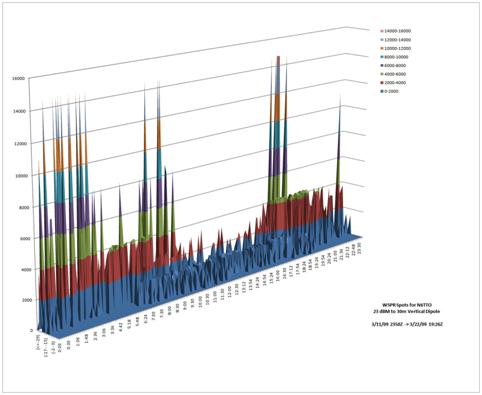 Comparing the two plots doesn't give a conclusive answer to which antenna is best...

When I first thought about this comparison method, I assumed that with the solar cycle at its current minima, there would be little variation in propagation during this 3 week period. After checking the archive of solar data (Solar flux level and A-Index) for the period, there were some significant perturbations: 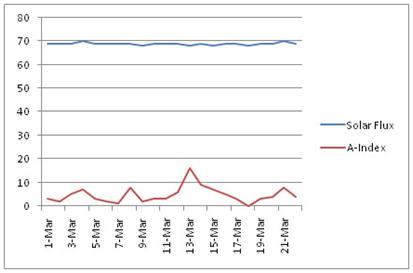 So while the above results are interesting, they are not definitive. A better comparison would be to do a true A/B comparison against the two antennas – ideally with two identical transmitters driving each antenna simultaneously on slightly different frequencies.

I don't have the capabilities to do this (yet!) so I may opt for a simpler comparison – using a single transmitter alternately feeding each antenna during back to back WSPR time periods. It's a simple matter to have the PIC use one of the attenuator relay drivers to instead switch a changeover relay between the two antennas.

Qualitatively, the inverted L seems to be a much better antenna despite its modeled radiation pattern. There was a significant increase in spots (both near and far) when I switched back to the inverted L.

I'm still no closer to understanding how WB3ANQ's performance is so stellar! However, in the intervening weeks since I started this "experiment", I've seen spots at the 50mw level from both Australia and Japan while my 10mw signal has made it to both Japan and Wake Island – 8,323 and 7,084 kilometers respectively.

Not bad for flea power!

I believe you are correct that valid comparison data can be collected faster by using two simultaneous transmitters, since many of the receiver/local receiver environment/ionospheric variables are accounted for.

I posted this a couple weeks ago.
http://www.charlespreston.net/antenna/WSPR-Antenna-Prop-Exp-PR.pdf